Chef and restauranteur Robert Weidmaier is a family man. He named his first restaurant, the highly acclaimed Marcel’s, after his first-born and the ever-popular Brasserie Beck after his second son. His restaurant progeny is treated with the same diplomatic paternalism. Over the past 14 years, Weidmaier has indiscriminately set roots in Washington DC (the above mentioned restaurants), Alexandria, VA (Brabo and Brabo Tasting Room), and Bethesda, MD (Mussel Bar & Grill, with a rebellious second location in Atlantic City). Six rocking establishments all serve up expertly executed cuisine inspired by Weidmaier’s German/French upbringing.

The chef’s latest creation, Wildwood Kitchen, exposes Weidmaier’s quieter side.  The restaurant is a neighborhood gem, a casual go-to spot for well-to-do Bethesda dwellers, with a menu offering healthy Mediterranean inspired food, far lighter than Weidmaier’s typical fare. Dying to try the place, Mr. Green Bean and I dragged Ma and Pa Green Bean and Sister Seitan from all the fabulous dining options in DC, up the long stretch of Old Georgetown Road.

The space, modestly tucked into the Shops at Wildwood in North Bethesda, is surprisingly bright and airy for its small size. High ceilings cut down on noise, a much appreciated feature for this slightly older crowd (I’m being kind). A “woodsy” theme abounds with exposed beams, natural wood tables and a trim of wallpaper featuring a glowing forest of plush trees.  We were seated and soon greeted by our server sporting a custom-made plaid button-down uniform.

The menu is small, yet offers a wide variety of appetizers and entrées featuring fresh seasonal vegetables, seafood, and white and red meats. As we looked over our options, we were served a basket of crusty french bread with a side of fresh tuna salad in a bowl of olive oil, sprinkled with fresh peppers and spices. While my table mates reached for the gluten, I was the only one enjoying the far more noteworthy condiment (which I’m sure would have tasted even grander spread on that bread). 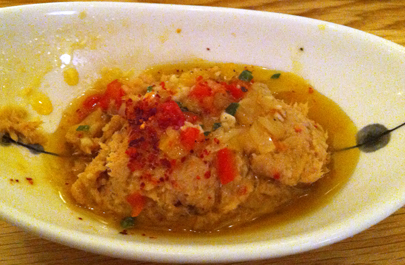 I started in with my waiter to size up Wildwood’s gluten-free consciousness. The restaurant proved to be one of my favorite types: predominantly gluten-free or happy to adapt with staff that is sincerely concerned but not alarmed by the allergy. At restaurants like this, there is no need for a gluten-free menu or gluten-free indicators, as the chef will make sure to customize whatever you’re craving. I decided to start with the gazpacho, a predictable summer starter that I usually refuse to order in protest of its unoriginality. However, this one was unique with its yellow tomatoes pureed to a translucent broth, poured table-side over finely diced watermelon and one tiny shrimp packed with a salty ocean punch. The bowl was perfectly balanced between its acidic, salty and sweet components. 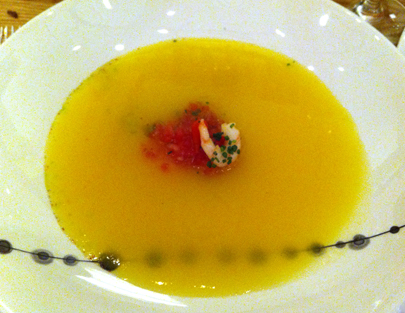 For my main course, I opted for the night’s special: skin on fillet of trout, simply grilled with olive oil, salt, pepper, and lime. The fish was topped with roasted tomatoes, green Mexican chickpeas, olives, sesame seeds, and a light pesto vinaigrette. Trout itself is not the most spectacular of fishes. But it acts nicely as a neutral platform from which scrumptious sauces and toppings can be laid. The dish was light, fresh, and perfectly portioned with a variety of textures and flavors. I actually felt healthier after cleaning my plate. 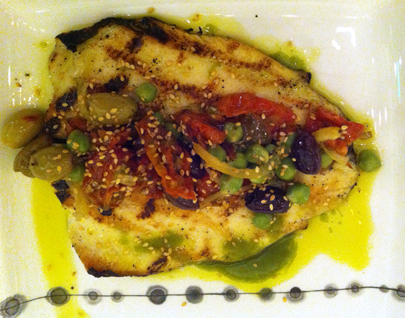 To my dismay the other plates ordered at the table were off-limits for my wandering fork. But the Pan-Seared Salmon, Grilled Farmhouse Chicken, and Braised Short Ribs all received fine marks. Sister Seitan had the chef cook up a vegetarian option, making sure it included something starchy (flashback to BlackSalt where the chef concocted a $28 plate of vegetables). She was pleased with her mystery dish, featuring her most favorite food group, pasta, and cashing in at an appropriate $18. With the menu as versatile and health conscious as it is, I’m baffled that Wildwood does not have a vegetarian item listed with its entrées. It’s amazingly true that being vegetarian is often more limiting than being gluten-free.

The dessert menu is a bit disappointing for us gluties with only sorbet and ice cream as options. We decided to pass, or so we thought. As we were celebrating the occasions of Mr. Green Bean’s birthday and our wedding anniversary, the obligatory sweet treat was served, accompanied by our family’s first-rate singing. How can I resist a bright yellow scoop of mango sorbet sprinkled with….I stopped as soon as I noticed suspicious chocolate balls adorning the bowl. The dish was whisked away (though it was a shame to waste and should have been left for others to enjoy), and a gluten-free, ball-less bowl was soon presented. Though not the most original dessert, it was some of the best mango sorbet I have tasted—sweet, tangy and creamy beyond what I thought a mango was capable of.

Overall, our experience was relaxing and delicious. I have some scruples about slightly overpriced appetizers, such as the night’s special tomato salad, featuring a meager amount of heirlooms and not much else, priced at $12, and the absence of a veggie main dish on the menu. However, of all the Weidmaier enterprises I’ve tried, Wildwood is my favorite child.