Growing up, taco night was my favorite night. Ma and Pa Glutie Foodie would have to cut me off after a messy 5 or 6 Old El Paso shells filled with ground beef or beans and cheese. Mexican cuisine is still one of my most beloved. Give me spicy salsa, fresh avocado, and crispy tortillas and I’m a happy glutie. There are plenty of mediocre Mexican offerings in the DC area; but following a trip to Richard Sandoval’s El Centro D.F., I thought I had met my Mexican soulmate.

El Centro and I met a few years back, when my good friend Lox (of Bagel and Lox) and I stopped in for nourishment after an evening of art reception hopping. We sat on two stools in the casual taqueria’s open seating area and were helped by a jovial server who informed me that the menu is nearly completely gluten-free. We gulped down house margaritas made with fresh lime and agave nectar (as apposed to sugar filled, artificially flavored and potentially gluten-containing mix), and I enjoyed every bite of my Chipotle Shrimp, served with black bean puree, market vegetables and white rice. El Centro offers delicious corn based, authentic Mexican comfort food in a hip, upscale environment, at more reasonable prices than many of its 14th street neighbors. I enthusiastically introduced El Centro to Mr. Green Bean. And Mr. GB and I returned with Sister Seitan, The Muffins, Souper Girl, Irish Coffee, Breakfast Blend… We met friends for frozen drinks on the lively rooftop bar and for more formal dining in the dark and sexy basement tequileria. It was a blissful time.

Then came the visit that left me wary. Miss Zin and I were excited to gorge on guacamole mashed table-side and perfectly salted tortilla chips fried in gluten-free oil. I began to explain my gluten “allergy” to the server as I always do, and instead of the usual rap, “just avoid the empanadas and dessert”, he started to scrunch his nose, wrinkle his forehead and pierce his lips. “Hmmmm, you can not eat anything”, was more or less his unapologetic response. He had to be kidding. You mean, the Mushroom Huarache (flatbread) I ordered last time has flour in the dough they swore was gluten-free? And the soft taco tortillas I’ve now eaten on multiple occasions are not 100% corn? He double checked with the kitchen and returned with more bad news. I could eat the ceviche. That was it. Feeling nauseous just thinking about all the gluten I had consumed over the past months, raw fish in an acid bath was the last thing I wanted. Miss Zin felt terrible and I was embarrassed. Was it possible my Mexican crush was breaking up with me?

But alas, on this very evening, the manager was making the rounds and stopped by our table to ask how everything (my ceviche) was. “Actually…”, and I told her my tale. Shocked, she apologized and rescinded the server’s misinformation. El Centro’s menu has always been nearly 80% gluten-free. So why the server’s certainty of quite the opposite? Was it a language barrier? This is not the first time I have had major confusion in a Mexican restaurant. But I never expected it from mi amore. The manager treated me to the Grilled Skirt Steak Huaraches I would have ordered had this alarming experience not occurred, and I ate it tentatively. We exchanged few words with our server after that.

I have since returned to El Centro and learned how to trust again. Just last week Miss Lox and I shared another indulgent dinner after burning all our energy at a schmoozy networking reception. After we were seated, I glanced at the menu, slightly modified since my last visit, and quizzed a clearly new employee, waiting for another alarming incident to begin. But to my relief, he understood my food restriction and was confident that the crispy shrimp tacos were safe for me to eat. Lightly fried baby shrimps are stuffed into three soft, 100% corn shells and served with aji amarillo aioli, pickled jalapeño, roasted corn and mexican rice. My usual favorite, the baja fish tacos, now have major competition. 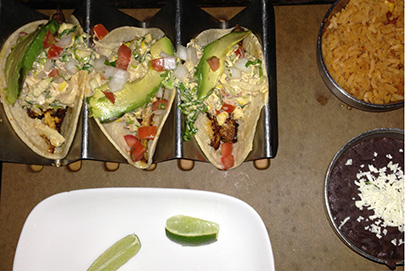 Despite it’s imperfections, El Centro has a magnetic pull. And with his new location in Georgetown, it will be even more difficult to stay away. Though I try to play hard to get, he remains a strong favorite in my restaurant rotation. Oh, El Centro, cómo te quiero.